Bells Corners has a population of about 10,000.  Historically, the community was mainly rural until the 1900s. By the 1950s, the neighbourhood had become a commercial center for the outlying rural areas. The area was first part of Nepean Township, and later the City of Nepean, until amalgamation with the City of Ottawa in 2001.

Most of the homes in the Bells Corners area were built between 1961- 1980. A large majority of the population own their homes. The community is made up of mostly single/detached and row house type dwellings. The neighbourhood also has a multi-storey housing complex, multiple retirement homes, and a co-operative housing project.  Pricing to purchase a property ranges from $175,000 (for a small, older townhome) to well over $500,000 (for a large, upgraded detached home). The great thing about this area is that there are options for every budget. 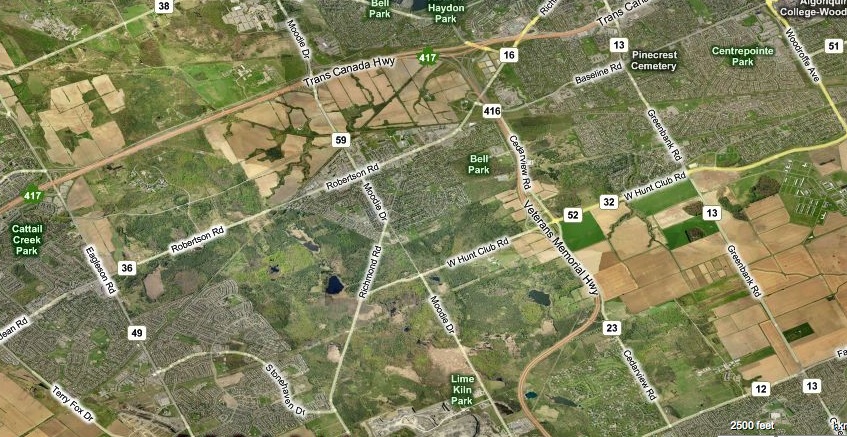 Bells Corners is conveniently located between downtown Ottawa and Kanata (home of the Ottawa Senators’ Canadian Tire Centre Arena), providing quick access to both.   The area is also steps away from Ottawa’s largest and most popular off leash Dog Park, located at 175 Cedarview road.

There is a vibrant and growing business community in the area, promoted city-wide by an active Business Improvement Area (BIA).

There are both local and chain restaurants including The Brew Table, Grazie Kitchen and Pizza, East Side Mario’s and Starbucks.  Retail stores include Winners, Loblaws, Shoppers Drug Mart and the LCBO.  Finally, the area hosts a number of hotels, banks, medical clinics and various professional services. Bells Corners is also quite close to Bayshore Shopping Centre, a major Ottawa mall and mass transit hub.

Overall, Bells Corners is a growing community with a ton of amenities and affordably priced real estate. If you are interested in moving to Ottawa’s West end, this could quite possibly be the neighbourhood for you. If you would like more information about Bells Corners, don’t hesitate to get in touch.